Christmas is for reading . . . and writing! 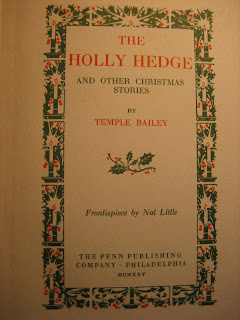 "It is bad enough to be poor on Christmas eve. But to be poor plus an imagination is to have an excess of poverty. Hardinger, plodding through the snowy streets, could picture mentally all that was going on inside the houses whose illumined windows broke the blackness of the night. Dinners were cooking--the thought of the savory food made his pulses leap as they leap for a man who thinks of his beloved. Hardinger felt that he had indeed reverted to the primitive when hunger swallowed up every other emotion. Food! He wanted it as a wolf wants it in the dead of winter--or a starved cat in an alley. Yet he had not a penny with which to buy bread. And he was not a beggar. He told himself that with an almost frantic emphasis on the negative, as he found himself mounting the steps of a terrace at the top of which was a great house."

Thus begins the short story "Three Who Stole at Christmas Time" by Temple Bailey. It concerns a hungry World War I vet, a grieving family, a kindhearted kitchen maid, a beautiful girl, and . . . well, it always has me sniffling by the end, no matter how many times I've read it.

The story is included in a collection of Christmas stories by Temple Bailey called The Holly Hedge. My copy was published in 1925, and is one of the few items I have left that belonged to an older relative who is long gone. Every December I pull it out, find a cozy spot, and read it cover to cover. After many years of this tradition, it finally dawned on me to find out something about the author.

Temple Bailey started her writing career in 1902 with short stories published in magazines like Collier's, McCall's, and The Saturday Evening Post (oh, for the days when magazines published lots of short fiction!). She went on to write novels and even a screenplay or two for the nascent movie industry. A few of her works are available online through Project Gutenberg, but I wasn't able to locate any stories from The Holly Hedge. However, used copies of The Holly Hedge are available through Amazon and other sellers. It's worth a try if you like old-fashioned, sentimental (okay, maybe a bit corny) stories set at Christmastime during the post-World War I era.

What's your favorite Christmas read? Write up to 500 words about your favorite holiday story (or movie, or activity, or a stirring memory of holidays gone by) and send it to us on or before December 5 for our Winter Reflections Holiday Memories contest. It will help you get in the holiday spirit, and who knows--you might even win cash to help you with your Christmas shopping!
Posted by Jennifer Lamont Leo

What a treat to have a beloved 1925 copy of Christmas stories. You have established a nice tradition of reading it every year. Last night I began an anthology of Christmas stories titled "Mystery for Christmas". It was stories from Hawthorne, Dickens, Thomas Hardy and 8 others. Maybe the last 8 were good. I quit after three as each was too weird and depressing. I'll look for a copy of "The Holly Hedge". Thanks for the recommendation and nice post.