Spiritual Nourishment From A Lilac Poet

Yesterday four inches of snow covered the view outside my window and the forecast called for more. But my thoughts were of spring and the sun-warmed fragrance of my lilacs. 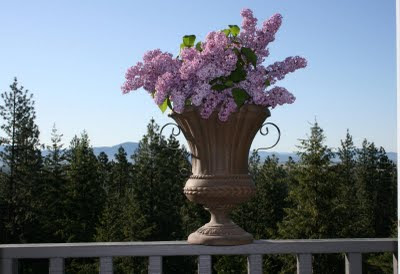 Those lilac-colored thoughts turned my mind toward one of my favorite poets, Jessie Cameron Alison, who was given the title of “A Lilac Poet" during her writing career. Jessie Cameron was born in Kingston, Ontario, Canada in the mid-1880s. Her father, a well-known Canadian poet, lawyer, and journalist, died shortly after her birth. His poetry was later collected and published by her uncle who encouraged Jessie's budding talent.

Following her graduation as Valedictorian at Coldwater, Michigan high school, Jessie attended Michigan State College; graduating with a teaching degree. She followed her profession to Spokane, Washington, where she taught until her marriage to local banker, Charles E. Alison. Upon his appointment as manager of Idaho First National Bank, the couple moved to Coeur d'Alene, where they settled permanently. 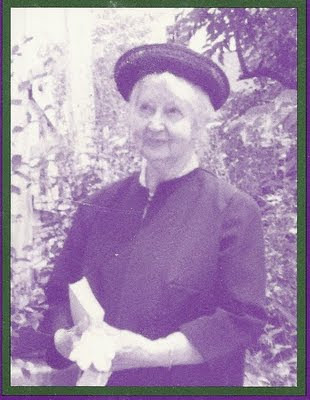 "She writes with the beauty and simplicity of lilacs abloom."
Editor, Poetry Scribes.

Jessie was an avid writer, pianist, song writer, speaker, and organizer; and a member of numerous writing, society, and community organizations. In 1943 she organized and was the first president of the Coeur d'Alene Chapter of the Idaho Writers' League. Today the organization continues to inspire writers and poets in the area.

Jessie Cameron Alison is a rare, fine lady...her presence at our meetings adds a distinct touch of elegant creativity that we all appreciate. - Paula Barnhart, 1965 Leaguegazette

She received many awards throughout her writing career, including national and international recognition. In 1956 she was awarded the title of Spokane Lilac Poet and also was given the title of Poet Laureate by the Washington Fine Arts Federation that same year. 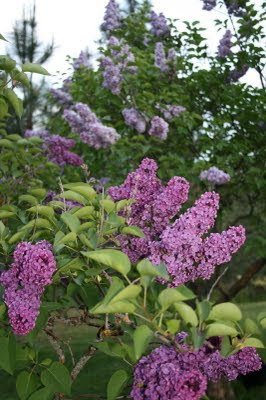 The lilac is abloom beside my door! –
May’s treasure – each year lovelier than before –
Its scented clusters swaying in the breeze,
Inviting roving butterflies and bees;
From tree and bush I hear an unseen throng
Of feathered singers, bringing gay new song…
I know that Spring has come at last to stay:
The lilac blooms beside my door today!

Sweet Lilac! What dear memories you bring
Of childhood hours – your fragrant blossoming
By homelike cottages, and country lanes,
Or formal gardens where your beauty reigns!
Recalling joys of home, of church, of school,
I breathe deep of your fragrance, pure and cool!
From laden brush I break a scented spray –
And welcome Spring! – since you have bloomed today!

I purchased Jessie’s book of inspirational poetry “Sharing The Song; Selections of Verse by a Lilac Poet” several years ago. I keep it on a handy shelf and pick it up every now and when I need to beam some sunshine on my soul - on a day like today. Reading Jessie's poems about our little corner of the world: Spokane, Coeur d'Alene, Washington, Idaho; and the flowers, lakes, and mountains that we see daily, adds a depth of perception to her poetry that I cherish.

When Lilacs Welcome
When lilac buds have burst to bloom
On hills and valleys of Spokane,
When larks are trilling roundelays
More sweet than fabled notes of Pan,

The River rushes joyously,
The tumbling Falls lift rainbow spray
in welcome to each visitor
and native son, for festal day.

The Queen of Spring holds Royal Court,
When lilac fragrance fills the air;
Our chosen Princess brings her throng
Of maidens -- fairest of the fair:

A Theme of Beauty and of Home --
No sweeter song the heart can sing! --
No other song can quite compare:
SPOKANE -- and LILACS -- in the Spring!
-- Jessie Cameron Alison

Although I've focused on Jessie's lilac poems, her poems offer spiritual nourishment that touches on many subjects including friends and family, God, patriotism, nature, and home. I especially enjoyed one she addressed to a Russian astronaut:

To Titov, Astronaut
("Not God, nor any angels?")
Titov: As you were orbiting through space,
You say you found not God in any place? --
Nor angels?...Is it strange you were denied
Vision of Him you have so long defied?

God is a Spirit -- you, of mortal mold;
No man can see Him...flesh cannot behold --
And yet His Presence was surrounding you
Through all your flight: the God you never knew!

The blazing Sun, that gave your daytime Light --
The Moon -- the scintillating Stars of Night:
Their ageless orbits speak a Power Divine --
Intelligence surpassing yours and mine.

Think you this Universe was formed by Chance?
Science but uses God's sure Circumstance;
Upon His certain Laws, your flight was planned...
By His Laws you were held as Earth was spanned.

What countless galaxies! -- Earth, but a dot! --
And yet -- there is no place where God is not!...
You, Titov, of all others should proclaim
Creator's marvels -- and revere His Name.
- Jessie Cameron Alison

"Her poems stand the test of time...carefully thought out and faithfully composed. Optimistic, emphasizing the love of the good, the beautiful, nature, and closeness with God. The thoughts are straightforward, Clean and clear...the very image of a dear person."
- Florence Boutwell, Spokane Poet & Spokane Valley Historian
Jessie Cameron Alison died in 1968 following a brief illness. At her request, her family put together a collection of her poetry and published her book, "Sharing The Song." It contains only a portion of the many poems she wrote during her lifetime. At the time of her death in her early '80s, there were unfinished poems on her desk.

Notes: The photos of lilacs were taken at my home. To my knowledge, the only place Jessie's book is available is through the Coeur d'Alene Chapter of the Idaho Writer's League. The biographical information included in this post was gleaned from the Biography printed in "Sharing The Song."

What beautiful poetry Ms. Alison wrote. Thanks for brining her to mind again and especially her lovely lilac poems.

Jessie Cameron Alison's new poetry book "Rhymes For Runabouts" has just been published by ggrandaughter Josephine Cameron. It will delight children (or grown up) alike!

It can be found on Amazon.com